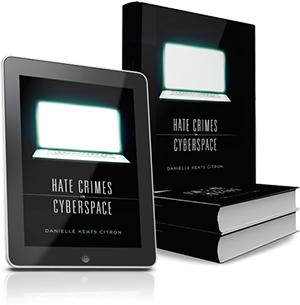 Featured as the Centerpiece of an Online Symposium Held by the Boston University Law Review.

Reviewed by Erwin Chemerinsky in the Chronicle of Higher Education, Martha Nussbaum in The Nation, Robin West in Jotwell, and many others:

“Vividly written and carefully argued, the book is a fine account of law in this area… We should, as Citron argues, reject the facile romanticization of the Internet as the last frontier of true freedom. We should acknowledge that the Internet both facilitates expression and silences, both allows speech and muzzles it… The major contribution of Citron’s book is its lucid summary of the vast network of laws, both state and federal, that are pertinent to cyberabuse. As she shows, we can do quite a lot for victims of cyberabuse without chilling expression… Citron confronts the perpetual free-speech/First Amendment problems attendant to her family of proposals head-on, and the case she makes is persuasive… Citron makes a number of useful proposals for legal reform while convincing readers of the seriousness of the problem.”—Martha C. Nussbaum, The Nation

“Danielle Citron’s Hate Crimes in Cyberspace is a breakthrough book. It has been compared, and with good reason, to Catherine MacKinnon’s Sexual Harassment of Working Women. The book makes three major contributions. All are central to furthering the equality of women and men both in cyberspace and elsewhere. The book thus serves as a blueprint for what Citron insightfully calls a new civil rights movement. It gives legal representatives and victims a roadmap for charting out legal actions that can be taken to halt the abuse being currently suffered, and to compensate for past harms. It gives state and federal legislators a menu of options for strengthening the law in this area, so that cyberspace can be a safe as well as robust domain for the expression of views on all subjects. It responds to First Amendment worries about the possibility that her proposed reforms might chill valuable speech, and it suggests paths for interested private parties who want to affect the trajectory here outside the law. It’s a tour de force and I believe it will succeed. It will change the law, change the conversation, and change attitudes toward and regarding this extraordinarily abusive and harmful behavior. It will strengthen women’s civil rights, and thus strengthen women’s equality and at core, it will be a significant step toward ensuring women’s safety in the public space of employment and education, as well as in cyberspace and the home. This is a book to celebrate, to study, to argue over, and, mostly, to use.” —Robin West, Jotwell

“Citron…focuses on how online hate speech ruins lives, most often women’s lives. She cites surveys that show that 60 to 70 percent of cyber stalking victims are women, and she details cases in which women have been targeted, defamed, and threatened with rape and murder…The very same things that make the Internet such a uniquely powerful medium for freedom of speech make it a uniquely powerful medium for hate crimes…The difficult question–as always in First Amendment and most constitutional litigation–is where to draw the line. In grappling with that and offering provisional answers, Citron [does] a great service.” —Erwin Chemerinsky Chronicle of Higher Education

“This book sets forth a compelling argument that the internet should not be allowed to maintain its ‘Wild West’ anarchic status, because its ability to facilitate cyber-bullying outweighs the virtues of maintaining that status… Hate Crimes in Cyberspace’s main strength lies in its sustained and detailed exploration of the bizarrely convoluted, sustained and extremely hurtful nature of online abuse of individuals… Its pioneering research could and should be used to support the case for introducing a criminal offence of gender-based hate speech in various countries.”—Helen Fenwick, Times Higher Education

“To be sure, police and prosecutors regularly fail to enforce existing laws when it comes to online abuse, either because they don’t take the abuse seriously or because they lack the technological skills to find the perpetrators. But while better training and more resources are certainly necessary, Citron argues persuasively that the law itself needs to evolve as well.”—Michelle Goldberg, The Nation

“An impassioned call for equal rights for women on the Internet. . . . Citron offers well-considered and modest changes to communications law and judicial procedure that could go a long way toward opening the Internet to safer and wider use by currently victimized groups. Her suggestion that anonymity online should be treated as a privilege that can be lost by violations of a site’s terms of service is particularly constructive… Frightening and infuriating, this demand for legal accountability for Internet barbarism deserves widespread exposure and serious consideration.”—Kirkus Reviews (starred review)

“There sometimes seems to be a river of hate on the internet, flowing steadily through different social media; people are often hurt, and there is no obvious end to it. In this book, Danielle Citron, an American law professor, proposes, with quiet authority, how we, as digital citizens, lawmakers, internet intermediaries and educators, can make a change.”—Katharine Quarmby, The Guardian